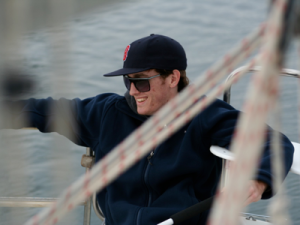 The day started well enough. Nick and I replaced the cam cleats and lines for the traveler and did some routine tightening of nuts and bolts here and there. The system check was unvaried from countless ones before–No problems. We sailed into a small cove on the west side of the lake nestled behind an outcropping. When the lake is full  the point of the outcropping will be an island. The boat ghosted past the steep terrain of the “island” less than a boat length away.

From there it was up to Castle Creek. We sailed in further than I had during my solo trip a week earlier. With binoculars, Nick could read the words on the buoys that formed a straight line across the creek. “Hazards not marked upstream.” I’m not superstitious, but that should have been an omen. The sky was overcast. I could not see the bottom. The depth finder showed 20+ feet but ahead in the middle of the creek, 15 yards from a gradually sloping shore on the east side, there appeared to be tree branches jutting out of the water.

I decided to turn around rather than going to the left of the “trees” and further along the unmarked and probably shallower creek. Just as the stern swung in behind the bow, there was a bump. The rudder had nudged something. The boat was going only 2 knots and the “bump” neither changed the speed nor felt like there had been any damage.       Still, it served as a reminder.

It was around 5 when the wind died. I usually like to be closer to the marina before I resort to the engine, but with no signs of wind anywhere on the lake, drifting for principle’s sake was not a option, especially with the sun going down. After furling the genoa, we lowered the main with the slides coming out of the mast, rolled the sail, and tied it to the boom. The sail cover on, I started the engine and headed south.

It was the smoke coming out of the exhaust that got my attention. The engine water temperature was at 140 degrees. Nothing unusual about that. I looked back at the smoke, which looked like the engine was burning oil. By the time I looked at the water temperature gauge again, the pin was in the 280 degrees neighborhood. That’s not a good neighborhood.

I opened the engine compartment. Smoke rose from the port side of the engine. My first thought was whether during the routine system check, I had forgotten to open the sea cock for the fresh water cooling system. It was open. Had the coolant leaked out? After the engine was off what I subjectively deemed a suitable length of time, I twisted slightly the radiator cap. Coolant hissed out. When the cap eventually came off, the coolant level was still high. The source of the smoke and smell of something burning remained unknown. Drifting was one thing. Putting out a fire on a boat was another.

At 5:15, I tried to raise Pleasant Harbor Marina on the VHF. No response. I called PHM security via the menu on the main phone line and then via the direct number. Security did not answer and the voice mail box was full. Next was a call to Boat U.S., which initially said my policy had expired before it was confirmed that my check not only was in the mail, but that it had been received and cashed. Once that was established, Kim at Boat U.S., who was exceedingly pleasant and professional, called PHM, the Sheriff’s Department, and a towing service, all to no avail, as she reported when she called several times to give me updates. I signaled an SOS with a flashlight to a passing powerboat.

In the meantime, the mainsail was back up and the genoa unfurled. The Velocitek reflected speeds (wrong word) below 1 knot and sometimes almost 2. The sun was long gone when I decided that, unable to see the island near the north end of the marina, it would probably be better to sail south to the dam. There would be less room to tack if necessary, but at least I’d be able to see where I want to go.

As we neared the south end of the break water, the wind rose enough that we hurtled along at 3 knots. Close hauled between the dam and the boom, we passed a mooring ball and, giving ourselves a 5 boat length margin of error, tacked into the marina. After a mind-numbingly slow passage in the lake, it seemed our patience was finally being rewarded.

With the wind ahead, I decided to furl the genoa as we turned into the channel of our slip. I figured the main would be sufficient to carry us down the channel and that it would be easier for Nick to maneuver on the bow without the genoa in the way. Finally, the air was light enough that even if we could not get the main down before we glided into the slip, releasing the main sheet would spill off any wind as we turned into the slip.

One problem. The wind headed us all the way down the channel. And the channel was a ghost town. We were still on our own. I tried turning the boat enough to tack our way down the channel, but with almost no boat speed, I had to fall off so much that we were going to visit a transom before we had enough momentum to carry us through another tack. Pumping the sail didn’t help; the wind was too far forward. Skulling the tiller turned the bow but the stern drifted toward boats in their slips.

If Nick decides to apply for a summer job as a Venetian gondolier, he’ll be able to list his experience last night on Lake Pleasant. Using the boat hook against the bow anchors of power boats, he propelled Sloop Dogg down the channel. With Nick’s last push, there was enough steerage for me to point the bow toward our slip where Nick jumped off and grappled the boat into the slip.

It took 2 and 1/2 hours to sail into the slip. I was glad to have  had the experience and even happier it had been with Nick. The feeling of frustration gave way to a sense of accomplishment.