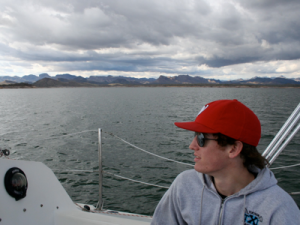 After closing the office Wednesday at noon, I saw Ann and Hadley off to Scottsdale, worked at home, went to the gym, and stayed up way too late, eventually watching my 2006 and 2007 end of the year videos for the Tucson Xtreme High School Lacrosse team. Memories going back to Nick starting to play in the 6th grade flowed. I realized that some of the happiest times in my life revolved around lacrosse (and still do with Hadley playing), including the friends Nick made, the families we got to know over the years, and the time we spent helping Nick’s teams. Nick was out that night with a few of his former teammates and would be coming home so we could leave the next morning for Scottsdale and Thanksgiving with Ann’s sister and her family.

On Thursday, not surprisingly, I-10 between Tucson and Phoenix was a long line of cars in both directions, slow downs for no apparent reason until the wrecks came into view, and a great place to hang out. Nick and I had not had much time to do that in a while. The conversation went off in as many directions as the horizon and, with at least a two hour drive and no set arrival time, was as unhurried as the trip.

Families can be more complex than the ingredients and cooking directions for a Thanksgiving meal. On Thursday, the flavors were subtle, complex, and inviting. By mid afternoon, my lack of sleep (compounded by going to the gym Thursday morning before Nick woke up), caught up with me and, in the tradition of my Uncle Mike, I fell asleep in the family room.

When the meal was served and everyone seated, Ann prompted each of us to say what we were thankful for. I said I was thankful for my time in the car with Nick. Brother-in-law Tom’s speech and would be toast went on so long I complained I was developing tennis elbow from holding my wine glass out. With some of the remarks, there were tears, all flowing from happiness. It was a wonderful, relaxed time together.

The plan on Friday was to sail with Tom and my 11-year old nephew Tommy, but it turned out they were going on a Cub Scout hike. That left Nick and me, heading to the boat to sail together for the first time since Bitter End in June.

With the mainsail cover off, shore power disconnected, and systems check complete, I explained to Nick how to handle the tiller, transmission and throttle when I pushed the boat back out of the slip. His first time driving the boat out of the slip, he assumed the responsibility by asking the right questions so he could get it right and handled it well. In fact, he drove out of the marina while I untied the fenders and then on the lake while I raised the mainsail and unfurled the genoa.

The air was light as we headed northwest on a broad reach to go up the lake but we pulled away from about 5 other sailboats that had come into the lake shortly after us and were apparently trying to beam reach their way gradually up the lake. Puffs materialized and approached us but often stopped short. We decided to sail to the wind. I went to the bow and set the whisker pole and we pulled even further away from the boats sailing parallel to the dam near the marina.

All the while Nick drove. We gybed and went to the west of an island that, from a distance, blended in with the shore. Looking at a map now, I am unsure if the island was at the mouth of Pipeline Cove or if we were in fact in Cottonwood Creek, though I don’t think we were that far north, based on the angle we sailed to pass to the north of Balance Rock Island.

On a close reach between Balance Rock Island and North Baker Island, we hit 5+ knots, sailed around reef markers, and found a groove. We then left to starboard an island at the mouth of the Agua Fria River and tacked up the channel that  led back to the lake.

Nick pointed out that clouds were coming in from the Bradshaw Mountains. It started to drizzle as we headed south so I gave Nick a foul weather jacket. When Nick went below to change the music, I took over driving and we started to catch a Catalina 25 that was also on a starboard tack a half mile ahead of us. Nick played the mainsheet in the puffs and, after we followed the 25 onto port tack, we caught up, and then, tacked behind it back onto starboard for the last run to the marina.

It was the best day Nick and I have had sailing that I can remember. I think–and hope–it renewed his interest in sailing. If nothing else, it was great to spend that much time together. The long drive home flowed as easily as the water along the hull.