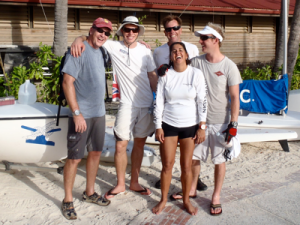 It was cold and nowhere near sunrise when I left for the airport, but I was already in Caribbean sailing mode so that meant a polo shirt, shorts and flip flops. No point wearing what you’re not going to wear. By 9:00 that night, 3 flights and a ferry ride behind us, Bob Whyte and I were eating dinner under a star splashed sky at Bitter End.

Jet and rum lagged, I got off to a slow start on Saturday but noticed IC 24’s racing on North Sound, their bows creasing waves and spinnakers puffing out from poles. After a restorative burger and Carib for lunch, I was talking with Samson at Water Sports about taking out a Laser when a guy with a British accent walked up and asked Samson if he knew anybody who could crew in the afternoon on an IC 24. I offered my services. “How much do you weigh?” 185. I was in. It turned out that with four crew, including 1 woman, the boat was light upwind in a breeze that was barreling in from Eustasia Sound. Finishing 5th out of 5 boats all morning, it was time to get more weight on the rail.

The crew of Gray Ghost included Stuart Bithell and Christian Birrell, who had won the UK’s Endeavor Cup, which is the equivalent of the US’s Champion of Champions. Stuart is also part of the No. 1 ranked British Olympic 470 team. The “bird” on the crew turned out to be Denise Holmberg, Peter Holmberg’s wife, and an experienced sailor in her own right. George, a British expatriate who brought the boat from Tortola, was the skipper. Gray Ghost pulled off a first place finish and did well enough in the afternoon that I was invited to race again Sunday morning. My chance encounter with George and the crew of Gray Ghost marked my official start of the Pro-Am Regatta and a truly outstanding week.