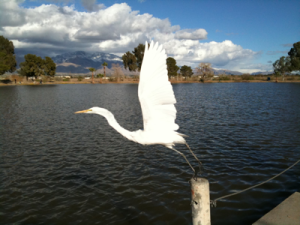 Following the trial in Phoenix of a case that had been ongoing seemingly longer the 100 Years War, it was time to sail. Flags were stiff and trees bowed at the waist as I pulled into Tucson late Thursday afternoon, but sleep deprivation overcame the urge to be air borne. What I needed was a good, stiff nap. Then, on Friday, the wind followed my cue and took the day off. Saturday, after Hadley’s lacrosse game, I was loading my car with the tiller, rudder, centerboard, and other essentials when Ann announced she had re-named my Sunfish Crack,in light of my apparent addiction.

Frost biting in Tucson is not exactly bitingly frosty. Unlike my friend, Peter Burgard, who claims he can launch a dinghy from the shore without getting his feet wet, I am not that smart. As a result, I have developed an immunity to, or at least an accommodation of, cold water. Saturday was no different with me walking–and later wading–in to get the boat off the trailer and then the shore.

Even though I had not sailed Crack (not sure the name is addictive) in two weeks, I was sailing along smartly, tacking smoothly and heeling the boat to windward when heading downwind. I was working on roll tacks through a narrow part of the lake when a gust hit. I reached for the high side but missed and felt the inevitable certainty of the boat coming over on top of me. Flipping over backward, I made my contribution to the Custom Dismount archives.

A female fisherman (Could somebody from the Oxymoron Department get back to me on that one?) inquired about my well-being and then, determining that I would live to sail another day, asked me to swim further toward the middle of the lake and provide updates on the depth. I suggested she renew that request in July.

The only option was to get back in the saddle again and finish my upwind run. I was pleasantly pleased to learn that a cotton turtleneck and SLAM sailing vest, even when wet, provide a good thermal layer. Or maybe it was the adrenaline. In any event, the fisherman along the shore, who usually do not say a word to me, found the Custom Dismount to be highly entertaining. And, as it turns out, fishing was so slow along the length of the lake, that everybody saw it. Tucson, even at the lake, is a small town.