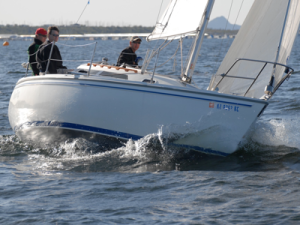 I was coughing like a coal miner but it made therapeutic sense (to me, if not my wife) to drive from Tucson to Lake Pleasant on Saturday night and sleep overnight on a sailboat with the overnight low in the 40’s, the idea being that it would hit 80 while we were racing the next day and the dry, fresh air and abundant vitamin D would clear my lungs, head and lingering unhappy thoughts from a long week.

In the morning, the wind was blowing more than the “light and variable” predicted and with small whitecaps on the water, we were playing the traveler during the first race to avoid excessive heal and weather helm in the puffs. It was also nowhere near 80. The second race degenerated in short order into a drifter and the race committee saw to it that there was nothing short about the race. Four of us were TLE.

While I enjoyed taking the waters, it had a less than tonic effect on my health. On the ride back to Tucson, my car could have been mistaken for a TB ward. An airline would have denied me a seat. Having asked me to regale him with stories of interesting cases, my crew Peter Burgard is probably now in quarantine.

Back in Tucson Sunday afternoon, my daughter asked me to go with her to Borders where I bought John Kretschmer’s At the Mercy of the Sea. I should have bought it Saturday and stayed in town, taking the waters from a distance, a safe distance in the case of the hurricane at the center of this outstanding book.