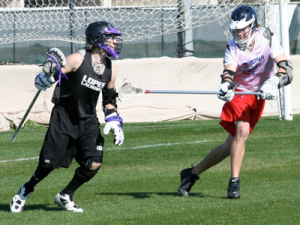 The Lake Pleasant spring racing season started today, but I had other plans. The U of A lacrosse team was in Phoenix for scrimmages against Northern Arizona University and Grand Canyon University at GCU. As I had been in Phoenix and at the lake since Thursday, it meant a short drive to the GCU campus.

After the scrimmages, I met Hardy at the lake and we took the boat out at the end of the afternoon to practice tacking  and sail back to the marina in the cloudy twilight.