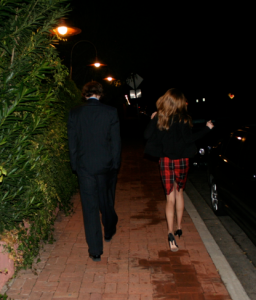 As soon as Ann and I walked onto Brian and Andy’s lot, we found ourselves in the gravitational pull of the perfect tree, that is until closer inspection revealed a SOLD tag. The tree next to it was not. We bought it. Given the size of the tree, packing it into the XC90 for the trip home was not a solution, unless we planned on leaving it in the car until after New Year’s when it wouldn’t matter that getting it out would snap most of the branches. It also didn’t take us long to rule out cinching the tree to the roof though the image of the Volvo seemingly propelled by an evergreen rocket mounted on the roof would have made a good photo op. Option 3: Delivery. We checked that box and went home to prepare the living room.

Christmas Eve, I closed the office at noon and went home. But nobody was there. Ann and Hadley were out with our contractor Daryle trying to find him a dog. When they returned, they recounted stories of puppies and abandoned dogs that I imagined in black and white because their adventure sounded so much like a 1940’s movie.

It has been our Christmas Even tradition for years to go to Mass at St. Philip’s and then dinner at the bar at the Arizona Inn. It has evolved only in the sense that Nick now wears a suit that I “outgrew” and Hadley looks disconcertingly like a young woman. After dinner in the Arizona Inn library, a guest offered to photograph all four of us in front of the tree. It might become, by default, the photo for our yet unsent holiday cards. In other words, nobody is making a ridiculous face or otherwise sabotaging the family portrait.

At home, Hadley and I (read Hadley as all I did was put my finger on the ribbon as necessary) finished wrapping gifts in my office while we watched Love Actually on my laptop. The next morning, the best gift of all was not under the tree and did not require unwrapping or even batteries. All four of us were home.

We worked our way through the gifts and eventually Ann and I toasted the day with a draft of the Mount Gay rum Hadley bought, or should I say, pulled off the shelf for me, saying it was a Christmas present, when we were shopping at Safeway. Meanwhile, Nick and Hadley played Left4Dead, whose tag line is “Can you survive the zombie apocalypse?” When I checked, they seemed to be surviving–even thriving–quite well. Morning drifted into afternoon and with no guests expected or places to go, we celebrated the day on island time. Merry Christmas, mon.