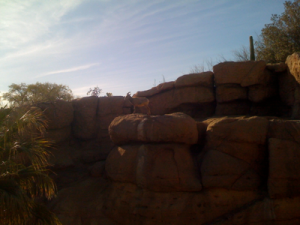 A perfect day. It was Nick’s idea. Go to the Desert Museum as a family. With Nick in college and Hadley in high school, it seemed the days of getting in the car with the kids in back and driving, if only across town, were over. Instead, the Desert Museum was the destination, but not the reason we got together. It was fun to have fun as a family. Starting with lunch at Baggins, moving on to the Desert Museum where Ann and Hadley paired off and Nick and I did the same, and then car shopping for Hadley. The day flowed easily, reminding me of a sign in the BVI that reflects the same attitude: No shirt. No shoes. No problem.

My life is so defined and narrowed by schedules, deadlines and commitments, I realized it had been years since I had driven west on Speedway, up the narrowing canyon on the winding road that, at the crest of Gates Pass, opens onto one of the most spectacular vistas in the West. Rock escarpments plunge to the the stands of saguaro spread across Avra Valley. The road itself has an almost shear drop off with no guardrail, which would ruin the view. It forces you to be careful, slow down, and give the landscape, which is timeless, the time it deserves.

Put this in the suggestion box at the Desert Museum–the name is all wrong. “Museum” is too staid, passive. Then again, I don’t really have any suggestions for a new name. (Maybe the suggestion box is the wrong place for this note.) It’s just that unless you reincarnate as Steve Irwin, you’re not going to get as up close and personal to so many animals from rattlesnakes to mountains lions. Museum seems to suggest an exhibition of something that’s already happened. While the Desert Museum displays the geological equivalent of “in the previous episode,” it is about the desert now and the plants and creatures that live here.

Why No. 26? This is the 26th edition of the random and irregular musings that comprise the Ship’s Logg. Admittedly, the number 26 is not commonly celebrated as a milestone, as that designation usually occurs in multiples of five. Twenty six, however, is the length of Sloop Dogg, the sail boat that inspired this website.

The 1/3/09 expedition with Nick that ended with an overheated engine and sailing into the slip was the first of 5 times sailing in January. With Mike and Maryellen Ferring along with Neil Thibodaux as crew, Sloop Dogg came in third in its 15 boat fleet at the Birthday Regatta and Leukemia Cup. Dave Evans filled in as crew for the first race weekend of the spring series.

In February, Hadley’s lacrosse season started with the Tucson Storm playing at the varsity level. The team boosted its confidence with a 6-5 win over Mountain Point on 2/21 followed by a 10-1 reality check loss to Xavier. Hadley scored twice in the first game and the only goal in the second. Even though it was the second game and they were down 7-0 at the half, the Storm regrouped and rallied in the second half.

Hadley’s game meant I missed race committee duty that day though I arrived at Lake Pleasant in time to help Maryellen Ferring and Amanda Woodcock finish setting up for the meal. Maybe it was the beer, but whatever the inspiration, I ended up grilling 60+ brats. For a while, the formula seemed to be “a brat for you, a beer for me.” That formula, if adhered to, would have had deleterious effects on brat production and quality control. (The choice was to have your brat black or really black.) As it were, I promised innumerable brat consumers that I had saved the best brat for them and the evening was, as they say, smooth sailing.

With our summer vacation still unplanned but tilting in favor of an expedition to Massachusetts in June, I signed up for the Pro-Am Race Week at Bitter End in November. I’m looking forward to both trips, to see family in the Bay State, and to race with some of the world’s best sailors in the Caribbean.

There’s also the need to sail more and have Nick and Hadley join me. The easiest way to accomplish both is to sail in Tucson. That’s right, Tucson sailing. I know you feel an oxymoron coming on, but two Sunfish will open up sailing on Tucson’s urban lakes (read ponds, better yet, puddles.) Ann, who has been eyeing a Viking oven, promised me a Viking funeral if the Sunfish Armada appears in local waters. Well, to paraphrase Geronimo, today is a good day to sail. I remain optimistic that Ann will even agree to a trailer hitch on the XC90. (I’m going to have to work on the delivery, but  I could blame Ann for the Sunfish situation. I finished reading one of Ann’s Christmas gifts, Sloop, by Daniel Robb. It’s a great read and an inspiration to sail a small boat. See, it’s not my fault. Then again, seeing that argument in print, it is too implausible, even for me.)

In the meantime, I at least got to spend two nights on the boat in February when I was in Phoenix for work. In the morning on Wednesday, 2/25, I took the kayak out at 7:30 in 55 degrees and a 10 mph wind. Overlooking that it was not going to be 80 until later in the day, I packed only nylon SLAM shorts, a tee shirt and a fleece but stayed warm with the life jacket. Paddling at water level provides a different perspective. Ducks took flight as I approached. Rolling swells I would not have noticed under sail got my attention when the kayak got tippy until I paddled into the wind. And there was nobody else on the lake, my lake.

The kayak also made me wonder about the possibility of keeping a Sunfish in the slip. In warmer weather, I would love to sail from the slip and into the early morning lake with a fresh breeze. Note to self: You don’t want the slip to look like the front yard that has cars on blocks. Note back to self: More flattering analogy–the slip will look like the driveway of a family with a selection of fun cars.

And it’s only March. There’s plenty of time for more fun with the family and on the water. The Chinese consider the number 4 to be unlucky. I don’t know what they think about 26, but for me it means good fortune.